When choosing which champion you want to bring into the jungle, there are three factors you’ll need to consider: survivability, clear time, and ability to close in on opposing champions. Both survivability and jungle clear time are important in the early game, because when fighting jungle camps, you’re fighting them by yourself.

This means that unless you like staring at a grey death screen, squishy champions like Jinx aren’t a good choice. Instead, some good champions for beginner junglers include Vi, Warwick, Xin Zhao, Jax, Malphite and Shyvanna. These champions are all durable, are able to clear jungle camps well, and have gap-closing attacks that make ganks and general engages easier. Just don’t be surprised if Jax gets banned when you enter a draft pick.

This can’t be said enough times, but if you’re going to play jungle, always take Smite. Yes, Teleport and Flash offer a ton of ganking and escaping potential, but Smite is needed to buy those jungle exclusive items that make jungling so much easier.

Smite deals insane true damage to jungle monsters as well as grants you short term buffs depending on which monster you smite. The Ancient Krug’s Gift of the Heavy Hands grants you a stun every 6 basic attacks, Red Brambleback gives you 20% of your max health, and Gromp grants you poisonous basic attacks. Besides the above, Smite can also be used to securing the last hit of a dragon or Baron kill, because nothing is more annoying than the enemy jungler stealing your objective at the last second.

Choosing the Machete That Suits Your Champion

Once you’ve entered a game with your chosen champion, you’re going to have to choose between two jungle items, Hunter’s Machete and Hunter’s Talisman. Which of these two items you’ll want to buy first will depend on your particular champion. Hunter’s Talisman’s mana regen will be more useful for mana-dependent champions like Fiddlesticks. Meanwhile, the Hunter’s Machete is more useful on attack speed champions such as Jax and Warwick due to its 8% lifesteal vs monsters.

Along with choosing between the two starting items, junglers can also choose between three advanced machetes. These three items are the Tracker’s Knife, Skirmisher’s Sabre and the Stalker’s Blade, and you’ll want to rush one of these because they enhance your Smite and give you a boost in exp for killing large monsters. Stalker’s Blade gives your Smite the ability to slow champions you hit, while Skirmisher’s Sabre’s Smite allows you to deal bonus true damage to champions for 3 seconds with your auto attacks. Which you’ll pick will be up to your preference.

Tracker’s Knife is a little more situational because instead of giving Smite a buff, it instead gives 2 Stealth Wards. While this doesn’t impact your ganking ability like the other two, this item can be very useful for countering roaming champions or just providing your team with extra vision.

Keep an Eye on Timers

Along with ganking lanes and clearing out your jungle, keep an eye on times for the Dragon, Baron Nashor and Rift Herald. These three monsters when killed provide powerful buffs to the killing team and will then despawn for a short while. The only exception to this is the Rift Herald, who despawns permenately at 19:45 unless in combat, in which case it will despawn at 19:55. Rift Herald also only provides its buff to the player who picks up its shrine. This buff works like a Baron buff for the player who kills the Rift Herald, so offer it to another lane, as it only has limited use to the jungler.

The Dragon spawns into the game at 2:30, and after killed, respawns after 6 minutes. Baron Nashor meanwhile replaces the Rift Herald at 20 minutes, and after killed, respawns after 7 minutes. Because they can have such impact on the game, keeping an eye on these monsters is a good idea. Keep them warded while they’re up or close to their respawn times, and remember you can also use the rift scuttler near the camps, as they work like wards after killed.

Warding these objectives means that should the other team try to take them, your team will either be able to intercept their effort, or come in and kill the weakened team after. If you do contest either Dragon or Baron, make sure you have enough teammates, otherwise you’re just going to be giving them some free kills alongside their new buffs.

Communication with Your Team Saves Lives (and Ends Them)

Communication with your team in League of Legends is key, and this is especially true for junglers. The jungler’s job is to gank lanes in order to harass the opposing team, and good communication with either pings or the chat can help your teammates prepare for your gank. Pings should also be used to alert your team to roaming champions or the opposing jungler, just in case they don’t notice them coming.

You should also ping your team when you’re about to go after a big objective, especially earlier on, because while many junglers like Warwick can solo dragons early game, you’re in trouble if the opposing team decides to interrupt. 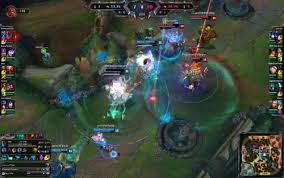 The final piece of advice this guide can give you is to check out some of the many, many YouTube videos made by high ranked players. These video’s allow you to learn from their many years of experience and due to the amount of videos available, there’s bound to be one for the champion of your choice.

Along with showing you how to play your favorite champion, these videos can also show you some of the best item builds, skill choices, and jungle camp rotations. However, 0nce you learn how to play your favorite champion, it’s recommended that you experiment with your own item builds and skill choices. After all, building the same items continuously gets boring after awhile, and finding your own style of playing is half of the fun.

Rarest League of Legends Skins You Don’t Have (Rare LoL Skins)
Top 10 Most Popular Games to Stream, Ranked by Average Viewers
Most Played Games Ever, Ranked by Peak Concurrent Players