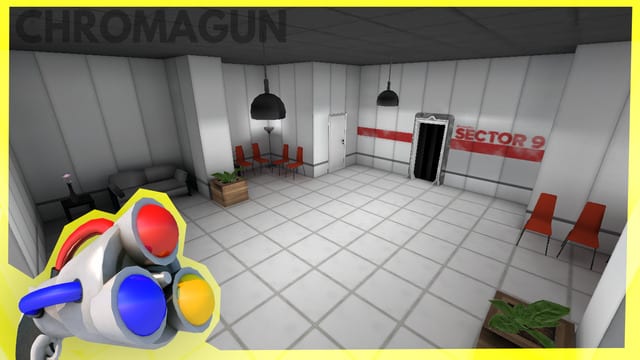 It’s hard to approach the first-person puzzle genre anymore without drawing comparisons to Portal. Of course, when the premise is the use of a strange, experimental weapon to solve puzzles, like ChromaGun, those comparisons come even easier. Pitting players against puzzle after dastardly puzzle, ChromaGun relies on the use of a bizarre pigment-throwing “weapon” to drive play and challenge players to overcome numerous obstacles.

ChromaGun does not spend as much time as Valve’s 2007 ground-breaking Portal did with scene-setting. There’s a brief introductory scene as players enter the game’s pseudo-scientific facility setting. Quickly armed with the titular paint-tosser, players must learn quickly how to identify which surfaces are susceptible to paint, and how the various pigments may affect their surroundings. The early going is all about getting your feet wet and getting a handle on the bizarre world.

Once players have overcome the simple beginning puzzles, it’s time to get down to serious business. Most of the game’s puzzles revolve around half-deadly worker drones that must be guided to switches, buttons, or deadly electrified maintenance tiles that pose an imminent threat. The drones are drawn to nearby surfaces that match their color, meaning that players will have to paint both the walls and the drones to ensure the desired effect.

The so-called weapon from which ChromaGun takes its name is not, in itself, very impressive. Players may cycle through the use of red, blue, or yellow paint, but there’s not much beyond that. These primary colors will often need to be combined to create green, purple, and orange to mix things up a bit. Adding any pigment to a secondary color, though, results in a dull brown that’s useless for drawing in the drones that may otherwise turn on the player and end their journey.

ChromaGun does include plenty of opportunities for players to end up dead, forcing a restart of the current level. Since these are mostly avoidable, it’s not a terrible setback, especially since most of the game’s levels are relatively short. What can become frustrating, however, is that a single mistake can render a puzzle irredeemable, causing players to have to start fresh as if they’d fallen victim to death.

Perhaps the fact that ChromaGun will punish errors in this way is a solid design choice, but I’m not so sure. One of the beautiful things about Portal, and other puzzle games that stand out against the crowd, is that it’s actually incredibly difficult to really corner yourself. While these games still present a challenge, they often present alternative problem-solving angles to allow players to recover from their own mistakes. ChromaGun, on the other hand, comes off as much more “single answer” than some of its genre kin.

All that said, I don’t want to come off too harshly against ChromaGun. It’s a well-designed game, and free from the glitches that can plague more hastily-made titles. The puzzles increase in difficulty over time, presenting a solid challenge to players as they go. Gameplay is smooth, though the graphics feel a bit dated. The sound isn’t especially impressive, but some decent voice acting eggs the player on with humor-laden narration.

Overall, ChromaGun is an interesting take on a genre that seems to always be brimming with fresh content. While some segments can be repetitive or frustrating, the overall experience shies away from too much rote repetition. The $14.99 price on Steam may be just a touch high for the rough 4-5 hours of gameplay, but not pushing too far given the overall quality.