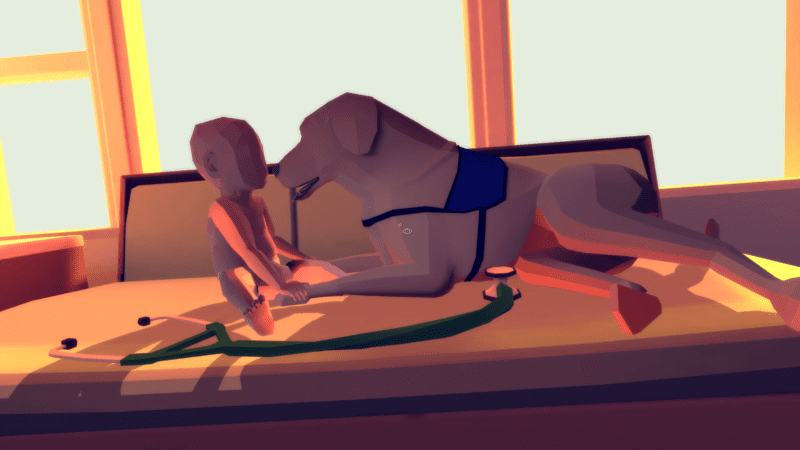 That Dragon, Cancer on PC

“No matter what I say they’ll wish it was longer. But sometimes longer is worse.” The words softly fell on the screen in one of the most poignant chapters of That Dragon, Cancer. The monologue of the doctor figure from which this quote was pulled from eloquently summarizes the emotional trauma that you’ll experience during your time playing. It was a quote that I took away from my experience with That Dragon, Cancer, and one which I feel excellently captures the experience to be had.

For those of you not in the know, That Dragon, Cancer is a Kickstarted project from parents Ryan and Amy Green. It tells the story of their son Joel and allows the player to gain a rather depressing insight into his truly sad story. Taking you step by step through the story of Joel as his aggressive form of brain cancer develops becomes much more than just a story, it’s a look through the keyhole into a world many of us fear, and some of us have had to experience first-hand.

Due to the tragic story it tells and the form in which it does so, it’s difficult to judge this much like many other games in the interactive story genre. Like games in this genre, That Dragon, Cancer relies heavily on its hard-hitting story to deliver a memorable experience rather than any quirky gameplay mechanics. Its environments have a unique pastel colored style, its characters have featureless faces and its soundtrack is a beautiful orchestral score. The game has a simple aesthetic and it complements the unfolding story well.

We need to mention this now. This isn’t a game. There are no real mechanics for you to try out except for a brief five minute old-school game section. You explore the basic but beautifully designed world and interact with objects, Joel, or other characters in order to push the sad tale of the family forward. Even within this genre, That Dragon, Cancer isn’t attempting to make this an enjoyable experience for gamers. Instead, That Dragon, Cancer feels like a way for the Green family to share their story, get some things off their chest, and finally get some closure on the events that plagued Joel’s life.

I did stumble upon an issue with the control scheme, however. When navigating the world, the point-and-click controls and the loose feel of the directional control led to me struggling to move about exactly where I wanted to. In other instances, be it a glitch or just another issue with the controls, the game wouldn’t bring up the icon to allow me to continue moving forward. It feels as though the game could have benefited from a control scheme allowing more free movement around the environment. Whether there were limitations that prevented this, however, is unclear. These were only slightly annoyances and rarely detracted from the game, but a niggling issue nonetheless.

Using a single button, you’ll interact with cell phones, letters, or people that often play authentic sound clips of Ryan and Amy discussing further or failed treatment options or their hopes and dreams for Joel’s future. These sound clips of Joel and his family are the defining feature of these characters, and while their physical forms may not have any feature per se, I still walked away feeling like I actually knew the Greens in real life. With the exact same button used to activated these sound clips, you’ll leap over gaps in an old-school video game used to represent the story of ‘Joel the Brave Knight,’ save characters in powerful metaphorical scenes and blow bubbles for Joel’s entertainment.

That Dragon, Cancer makes you feel just as helpless and at the mercy of cancer as the Green’s or any family that has had a loved one suffer from cancer. It’s not just the heart-wrenching audio clips of Amy or Ryan voicing their conflicting degrees of faith, the game puts you in a couple of highly metaphorical scenes that provide a visualization of the pain and anguish that they’re going through. During an incredibly distressing scene in a doctor’s clinic, the room will begin to fill with water when the awful news is given. Ultimately, the room turns into a turbulent and stormy sea with Amy in a boat with Joel without oars and Ryan drowning under the water. The scene doesn’t tell you how to interpret it, nor if you even have to, but it’s at these moments during That Dragon, Cancer, that the game really shines but also becomes emotionally draining.

Even the previously mentioned ‘game’ section where you play as ‘Joel the Brave Knight’ finds a way to become distressing. Regardless of how hard you fight against the dragon at the end, there is no defeating it and the characters are taken up to heaven to rest peacefully. It may be a truly depressing outlook on a horrible disease and situation, but That Dragon, Cancer feels like a bittersweet tribute to all of those who have lost their lives to cancer. As you walk the halls of the corridor, the walls are covered in artwork in one chapter, and letters to late loved ones stand on every surface in another. In the treatment room of the hospital, a wall is covered with the hand and footprints of children. All of these are beautifully sincere means of immortalizing tributes to loved ones of those who helped fund the game, and one of the most heartfelt means of rewarding those who funded the game that we’ve ever seen from a Kickstarter.

The closing moments of the game are truly heartfelt and through all of the emotional trauma of the previous chapters, it’s clear that the moments of happiness with Joel were worth all of the pain and suffering for the family and the way in which he will forever be remembered by them. It’s a heartwarming sight to be seen at the end of an otherwise very real two hours but a lovely way for us, as well as his family, to part ways with Joel.

With the emotionally draining effect that That Dragon, Cancer will have on you in mind, I’d still implore you to play it. If only to further understand the harm that cancer brings, not only to those diagnosed with the disease, but to their family and loved ones too. That Dragon, Cancer is a tragic tale and an everlasting tribute to all those who have suffered from cancer and despite the rather loose-feeling controls, it’s still worth your time.