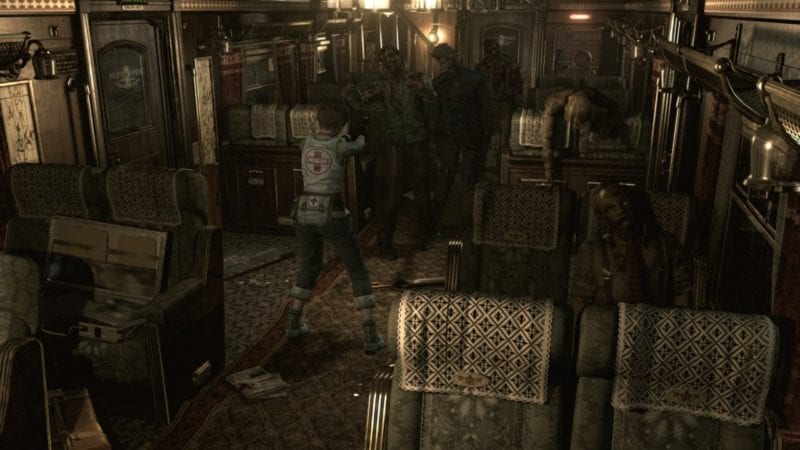 The train serves as the opening stage to Resident Evil 0, and it’s also the first major environmental puzzle you’ll encounter in the game. Your task is simple: stop the crazy death train and get out of there before it crashes.

Step 1: Getting the key to the Conductor’s office

When you take control of both Billy and Rebecca, head up the ladder at the end of the second floor of the dining car. This will take you to the roof of the train. As Rebecca, head all the way to the end and examine the wires. Rebecca will reconnect the wires before she’s pushed down the hole in the roof. Examine the nearby windowsill for the key to the Conductor’s office. Once you have it, call the service lift in the corner of the room and put the key in there before sending it down.

As Billy, head back the way you came and go back to the first floor of the dining car. Enter the automatic doors and down the narrow hallway to find the service lift. Grab the key and go all the way back to the first carriage to enter the office.

In the Conductor’s office, flip the red switch in the corner of the room to activate a ladder. Climb up the ladder, make your way across the hall, and enter the door. Once through the door, examine the trolley next to you to grab the ice pick. You need to give this ice pick to Rebecca to get her out of the room. As you head back the way you came, you’ll encounter the giant scorpion.

After killing the scorpion, examine the ground for the panel opener.

Step 3: Getting the Gold Ring

Head back to the dining car and give Rebecca the ice pick via the service lift. Head back to the kitchen and examine the panel in the corner of the room. Use the panel opener to open up a crawlspace. Head through the crawlspace and you’ll be assaulted by two zombie dogs. Kill them, and then check one of the cages for the gold ring.

Step 4: Getting the Hookshot

Head through the door just past the cages and you’ll be outside the train. Activate Solo mode and have Billy stand next to the green lever while Rebecca stands next to the wall with the Hookshot. Have Billy pull the lever, and then immediately swap to Rebecca to grab the Hookshot off the wall.

Step 5: Getting the Silver Ring

Make your way back to the second carriage of the train where you’ll see an open window with a ladder hanging outside. As Rebecca, go to the window and use the Hookshot to grab hold of the ladder. This will take her back up to the roof of the train. As you proceed, you’ll see a hole in the roof that allows you to drop into one of the passenger cabins. Drop down, and take care of the single zombie in the room. You’ll find the silver ring in the corner.

Now, make your way all the way back to the Conductor’s office in the first carriage. There is a closet in the corner of the room. Examine it, and you’ll find a briefcase. Simply combine the two rings with the briefcase, and you’ll be able to open it to get the keycard. This keycard will allow you to access the very front of the train.

Head to the very front of the carriage and a cutscene will play. You’ll now have to decide who stays in the driver’s seat, and who has to go all the way to the very back of the train. Whoever you choose, make sure the character who heads back to the back of the train grabs the magnetic keycard lying on the dashboard. Make your way back to the end where you first got the Hookshot. Here, you’ll have to solve a simple puzzle. A random number will flash on the screen, and you’ll have to key in 10 numbers that add up to give you that same number on the screen.

For example, if the given number is 81, you have to punch in 10 numbers from 1 to 9 that will add up to give you 81. The good news is, you can repeat numbers that you’ve already punched in. Once you’ve entered the first code, you’ll take control of the character in the driver’s cabin where you’ll have to solve the same puzzle. This time however, the screen will be cracked and you won’t be able to see the sum of the numbers you have punched in. This means you’ll have to do the calculations on your own as you’re punching in numbers.

Once you’ve solved both puzzles, you’ll apply the brakes to the train and a cutscene will play.