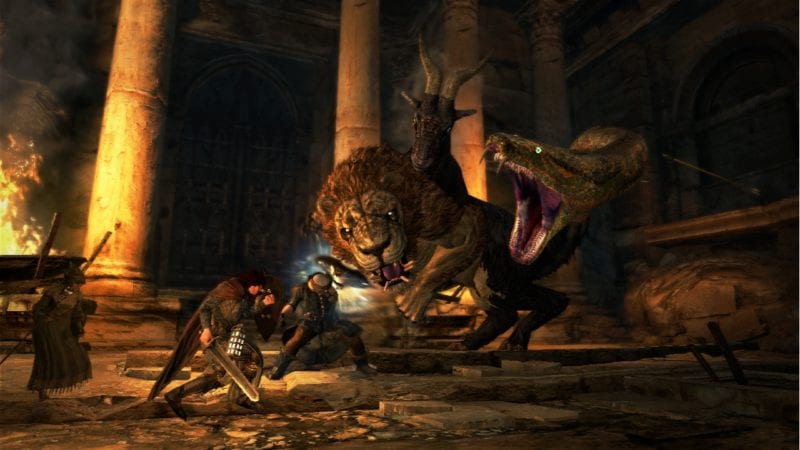 Dragon’s Dogma: Dark Arisen is one seriously challenging game. But, unlike most difficult games, it does provide you with a tutorial (though it isn’t exactly easy). The game will guide you through a few passageways, throwing a few weak enemies at you to give you a feel of the controls. Mostly Goblins for you to test your blade on. But once you get to the bottom of everything, there’s a huge Chimera staring you down.

Its imposing stature, quick reflexes, poisonous snake tail, lion and goat heads, and vicious attacks make it worthy foe. But don’t worry too much, you can overcome this foe, you’ll just have to be both quick and smart about how you approach this thing.

It has three heads, each with different attacks. The entire beast is weak against fire, and it is vulnerable to Torpor (slows it down), Blind, Tarred (makes it more vulnerable to fire), and Sleep. The Lion’s head has an extra weakness to magic in comparison to the other two heads, and the goat is especially susceptible to physical attacks. As far as attacks go, each head of the Chimera has its own specialty.

The snake tail can spew clouds of deadly poison that sit on the ground for a period of time and can do tons of damage to you if you’re not paying attention. The Goat relies on magic since it’s located on the back. Thundershock, Sopor (which can put you to sleep leaving you open to the Lion’s attacks), and Frigor (which hits with huge spires of ice). The Lion is all about those huge physical attacks.

Now that you know its attacks and weakness, it’s time to take it out. You’ll want to remove the Chimera’s heads in this order: Snake, Goat, Lion. The Snake’s poison abilities make moving around very difficult, so grab on to the back of the Chimera and hack away until the Snake falls. Next is that annoying Goat. Nothing is worse than falling asleep in the middle of a fight, and that’s all the Goat will make happen. After they’re out of the way, it’s just your team vs. the Lion and his pounces and roars.

Throughout the fight, don’t be afraid to spam the help button; this will make sure your Mage both buffs and heals you. Keep your ranged fighters back and don’t hesitate to mount the Chimera. Climbing beasts in Dragon’s Dogma: Dark Arisen will become second nature soon enough, so get used to it against this weirdly spliced monstrosity.

You should probably note that this won’t be your only encounter with this particular monster. While they aren’t incredibly common, there are a few scattered throughout the world just waiting to pounce.