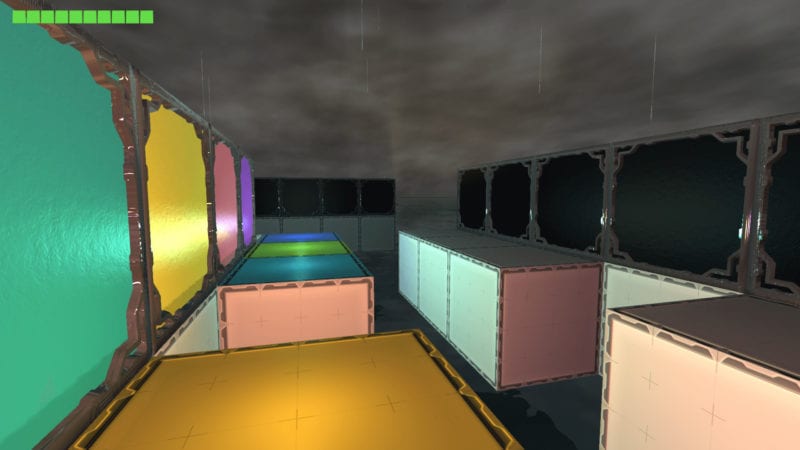 Every so often, I come across a game that’s not like anything else I’ve played before. Many times, this is a positive thing, and pushing the boundaries can lead to some great, unique experiences. Other times though, it falls flat. Sadly, the latter sums up my experience with the relatively interesting yet somewhat awkward Bloxitivity.

Bloxitivity is a first-person block puzzle game, which already sets it apart from much of what’s out there. Players will have to manipulate “Blox” into specific positions using a push and pull mechanism, all from the view of someone inside this strange and sparse world. Moving around within this world is a sluggish and somewhat arduous task, made all the more so by the surrounding deadly waters that threaten to end your game at the slightest misstep.

Making Bloxitivity even more difficult to play is a complete lack of Y-axis observation. Players can look around, but not up or down, so knowing where the edge of any given platform falls off into the sea is tough. Pushing or pulling the “Blox” requires that you be aligned straight with them, as well, so there’s no angled shots or subtle movements. The movement and interaction with the world around you all feels very stiff, and even the simplest of the game’s pre-built levels becomes a chore to complete.

Bloxitivity does have some positive points, though. The in-depth level creator allows a huge amount of freedom, and players can craft some pretty complex puzzles of their own. In addition to the “Blox”, there are plenty of other puzzle-game staples available, including teleporters, enemy spawners, conveyor belts, and so on. This creative aspect is the definite highlight, and Bloxitivity makes it pretty intuitive to create and share your own levels.

The problem with Bloxitivity is all in the actual play. While designing and sharing your own levels is a breeze and allows for a lot of creativity, the stiffness of the in-game controls, awkward camera, and other issues make actually enjoying these creations an entirely different beast. While I certainly applaud the efforts of the game’s expansive creation system, it’s hard to give a recommendation on that if the levels aren’t very fun to play once you’ve got them completed.

All told, Bloxitivity is a pretty cool level designer that’s hindered by the strange and difficult in-game controls and experience. If you’re the patient type and willing to work through the awkward play, the designing and sharing of your own levels is fantastic. In all honesty, I’m hard-pressed to think that there’s much here for anyone but the most dedicated puzzle fan. If that’s you, head on over to the games Steam page and give it a shot otherwise, proceed with caution.

Reviewer’s note: the Bloxitivity developer has reached out to clarify some points on the above, and in fairness, I want to address them. Firstly, there is a camera option which allows a top-down view during play, so players are not confined to a third-person view. In addition, within the third-person view, the game includes a vertical camera movement option which is disabled by default, but can be turned on for players who prefer Y-axis movement.