While it has been a fairly quiet year for the Nintendo 3DS, it definitely finished off 2015 with some flair, specifically thanks to the developers over at Image & Form. Their previous title, SteamWorld Dig, charmed the world, eventually making its way onto nearly every platform, giving a wholly unique and unexpected experience. SteamWorld Heist is no different, by taking the turn-based strategy genre and giving it their own twist for something endearing and enthralling.

The premise of SteamWorld Heist is simple: humans have destroyed Earth, robots have taken over the expanse of where Earth once stood, and they’re cowboys.

Well, technically they’re cowbots. Like Dig, Heist also takes on the very same Old Western vibe, as it takes place in the same SteamWorld, although it’s not a sequel. The fact that they’re all robots makes everything supremely charming. Even the moments where they’ll be talking about something particularly dark can turn riotous in seconds by the pun-filled names of characters or locations they might mention. 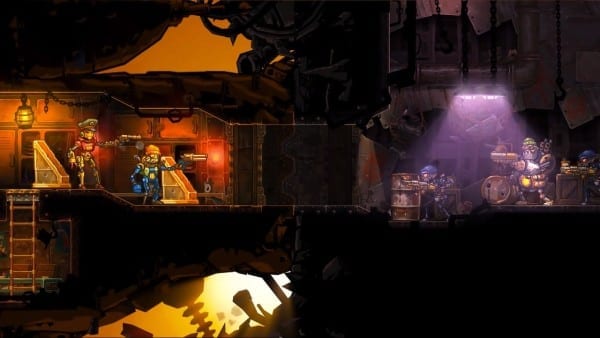 The characters are just one place in which SteamWorld Heist really shines. Piper Faraday is the captain of a space pirate band, and she coasts through the former-Earth’s orbit, fending off enemy space pirates and recruiting new cowbots. Piper makes a worthy protagonist whose authority is never questioned. The developers did not make her distinctly feminine to distinguish her among “male” robots; in the same fashion of Captain Phasma in Star Wars, she’s just a badass, and that’s all there is to it.

Additionally, each cowbot she recruits has a distinct personality that gets their moments in the Sun at various points in the game when Piper can speak with them aboard the ship. Sometimes they’ll reveal bits of their backstories or just simple anecdotes. Regardless, whatever they have to say is a treat. It’s enough to have a great game, but it’s also important for a game to contain the charisma that can keep players gripped and wanting to see it through to the end, and Heist has this in spades.

As for the meat of the gameplay, the developers at Image & Form did top-notch work in making the action feel as satisfying as it does. Before each mission, you may select your team, choose their loadout, choose what hat for them to wear, and then sit back while the game procedurally generates the level for you. The majority of the game’s levels are unique each time you play, even if you fail or forfeit and reenter the level. This kept me on my toes, changing up my strategies and tactics accordingly, as I was forced to take varying routes on my second try. 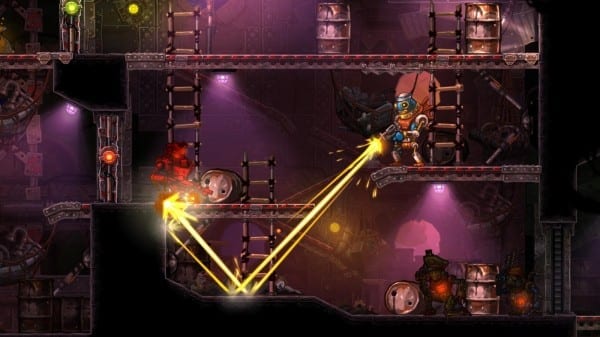 Just as well, the combat itself is a joy. With a bevy of firearms and upgrades to give your characters, its simple execution gives a delightful gratification as you blast each enemy to junkyard hell. Sniping, in particular, is my favorite, as it gives me the exact path the bullet or bullets will take, with the challenge of timing it just right, as the cowbots do try to keep their aim steady. Precisely shooting off enemies’ hats and stealing them is too good to avoid.

With each character having their own particular skills that unlock as they level up from combat experience, SteamWorld Heist offers a very nice amount of customization for a player’s preferred play style. As time goes, you’ll was able to start estimating what you want to prioritize, whether you want precision shooting or heavy firepower, and in what situations they would be most necessary. It may all be in 2D, but the tactical strategy elements remain as fleshed out as ever.

Imagine & Form proved themselves to be formidable developers with the release of SteamWorld Dig, but SteamWorld Heist just takes it to another level in so many ways. It’s simple yet ambitious with a presentation as charming as its execution. Becoming a robotic tactician never felt so good with its stellar combat mechanics. The journey itself benefits from the company of the different cowbots that offer something strange and hilarious to say. It’s hard not to love a game where characters yell “Fiddlesticks!” while in peril. At the time of writing this, the game is currently only on the Nintendo 3DS, and it’s a perfect fit. For those who don’t have a 3DS fear not, as it will also be released for every major platform throughout 2016. At least everyone will eventually get the chance to wear snazzy hats and be the badass robot space pirate they were always meant to be.