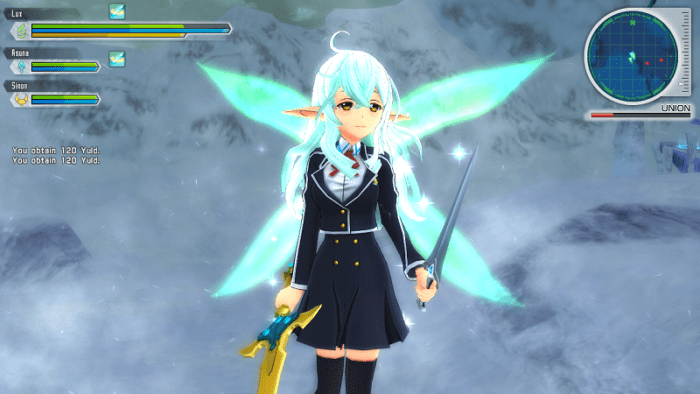 Sword Art Online: Lost Song has a lot of characters that you can recruit into your party and even play as them. It’s the first game that lets you play as one of the characters from the anime that isn’t Kirito.

While most are unlocked naturally as you progress through the game, others require a bit more leg work. One of those characters is Lux from the Sword Art Online: Girls Ops manga.

To unlock this character, you’ll need to first complete the main story. After you’ve done this, head back to Sky City Ryne (the hub town of the game) and switch your party members so that you have either Leafa, Silica, or Lisbeth (or all three, if you want). Now head out into the town and walk around.

You’ll want to look for the Undine (water fairy, same race as Asuna so look for someone who looks like her) that is talking about Lux. They won’t have a dot on the map, so you’ll just have to walk around and pay attention. Talk to her and she’ll tell you where to find Lux.

Now head back to the Last Island of the game and make your way to the northeast (top right corner of the map) and enter the dungeon. Complete it to recruit Lux into your team.

Have you added Lux to your Sword Art Online: Lost Song party yet? Enjoying her combat style? Feel free to let us know your thoughts in the comments below.