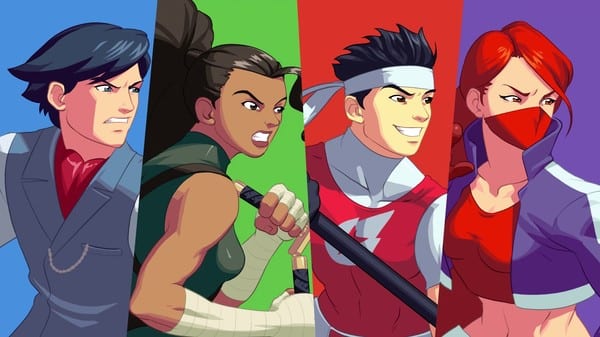 It’s always interesting to see what happens when a developer decides to mix genres that aren’t typically together. SkyScrappers, by Ground Shatter, does this by combining a fighting game with a fast-paced vertical platformer. A combination battle and race set on collapsing buildings, this title puts players in the role of one of four combatants taking part in one of the most bizarre tournaments ever. Let’s take a look at how this all unfolds.

Like a traditional fighting game, SkyScrappers is broken up into matches and rounds. Winning a match is as simple as winning a majority of rounds, either by beating the competition into submission or by being the first to reach the top of the stage. The whole of the game is played in an upwards-moving race mixed with combat, with two to four combatants taking part in each match.

Since SkyScrappers is set on buildings that are mid-collapse, there’s plenty of ways to climb up towards the top. Characters can run and jump off of larger debris, while smaller bits of crumbing architecture can only be used for a quick ‘bounce’ to keep momentum up. Along the way, of course, your fellow fighters will attack, either directly or by launching falling objects towards you. Falling too far behind will cause a loss of health, as well, but also springs you back up towards the action.

Of the many rounds of SkyScrappers I played for this review, only one ended with someone reaching the building’s top. Combat is definitely the way to go, and keeping your opposition beneath you by disrupting their jumps is the best strategy I’ve found for victory. After all, they can’t win if they can’t catch you. The other key, of course, is to never stop moving upward. Focusing on your own position and keeping it clear of the competition makes for the best and quickest wins.

That’s about it for gameplay in SkyScrappers. While the four characters are armed with different weapons, there doesn’t seem to be much functional difference between them during play. I didn’t find any to be particularly distinct, though the game’s pre-match dialogue will change depending on who’s up for the fight. The action is most tense during four-way battles, naturally, but ultimately things get repetitive pretty quickly due to the lack of individuality.

What SkyScrappers lacks in character design is made up for in the game’s overall look. Crisp, anime-style graphics go well with the game’s very quick pace, and the stage design for each of the locations is pretty slick. Sound design is very reminiscent of old-school arcade fighters, with a quick electronic beat behind all of the action. Despite the speed at which the game moves, it’s easy to keep track of what’s going on and where you’re at on the screen, which is a great credit to Ground Shatter’s work.

As far as a final verdict, I’m still a bit on the fence. Some difference between characters would go a long way, but the pace and design of the game make it a blast to play. There’s a multiplayer option, as well, but it’s local only — no online play here. For the $12.99 price on Steam, I’m not sure that style alone is enough to make a solid case, but if you’ve got a hankering for a unique style of fighting game, you may find it worth the buy. Otherwise, you’re likely better off finding something with a bit more substance to fit the flash.