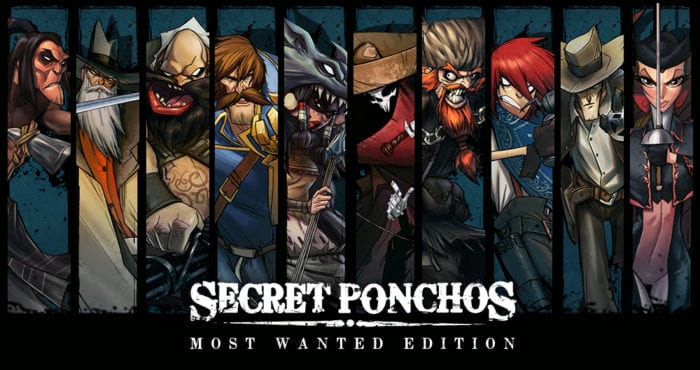 I’ve said before that I don’t play many competitive online games. While that hasn’t changed, every now and again something like Secret Ponchos: Most Wanted Edition comes along that breaks the trend for me. An online gunslinging 3v3 tournament, Secret Ponchos pits players against each other in “Spaghetti Western” style matches featuring a mix of interesting characters.

Gameplay in Secret Ponchos is pretty straightforward. You and your gang of up to three players take on the opposing gang in an all-out battle of gunplay, swords, and more. Each of the game’s 10 characters comes loaded with a different setup, and finding the outlaw that suits your play style is key. The variety here means almost any player can find a character that will suit them.

While you might think of Secret Ponchos as a game that’s focused on gunplay, there’s plenty of other options. I had a great time playing as Wolf, a vicious Native American armed with a bow and a hunting knife which she uses in a brutal leaping strike. Perhaps you’d be more comfortable with Kid Red’s dual-pistol and dynamite combination, the Matador’s bandarillos and sword, or Gordo’s huge gatling gun and molotov mix.

While Secret Ponchos’ gameplay is pretty straightforward, winning requires a good deal of skill and strategy. Each attack takes some time to execute, and there’s no aim assistance or other mechanics to help players succeed. Luckily, there’s an offline Arcade mode to hone your skills in one-on-one matches against AI opponents, giving ample opportunity to get the feel for any of the game’s combatants.

Beyond the great mix of characters and play styles, Secret Ponchos throws a few other things into the mix. A line of sight system means you can duck behind cover to vanish from your enemy’s field of view, and the online mode’s notoriety system allows players to pick up skins, perks, and more. An ever-growing bounty on your outlaw’s head shows other players just how dangerous you really are in the field.

Altogether, Secret Ponchos is a relatively simple, straightforward game with some very nice flair. Great visual and sound design bring the dusty Western setting to life, and a great cast of varied characters means tons of strategies to explore and refine. With a reasonable $14.99 price on Steam (or $44.99 for a four-pack), it’s tough not to say this is a great grab for players who thrive on competitive play, and it can even be a good pickup for those who, like me, aren’t normally interested in the genre.