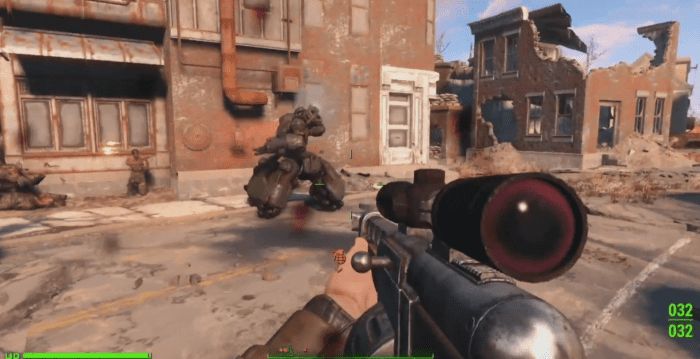 Be thankful that these guys are pretty rare. They are a nightmare when in a room with lots of cover, but are downright impossible to face out in the open. These are those huge robots with four legs that end in wheels. They are all black and armed with a mini-gun, a charging ability, smoke, and just all around meanness.

They have really tough armor, and can turn on a dime. A Sentry Bot’s weak spot is right on its back, but you’ll need to wait before you can take a stab at it. This robot can sense when there is a threat behind it and will instantly turn. That is, unless you wait for a specific attack.

As you fight the Sentry bot, it will go through a phase where it glows and lets off a lot of steam, pretty much going berserk for about 20 seconds or so. Do not engage when it is like this, it will literally just mow you down. Instead, wait for this phase to end, and then it will stop and cool off for a very short period of time. Use this opportunity to dash to a place where you can see the now exposed fusion cores on its upper back. Trigger V.A.T.S. and dump your ammo into this one spot.

The fusion cores on the Sentry Bot’s back are pretty weak. You should be able to destroy them during a single round of V.A.T.S. Even if you haven’t fired a single shot before this point, the Sentry Bot will be defeated, just make sure you create distance between yourself and the hulking robot. Upon death it triggers a mini nuclear explosion that can instantly kill you.