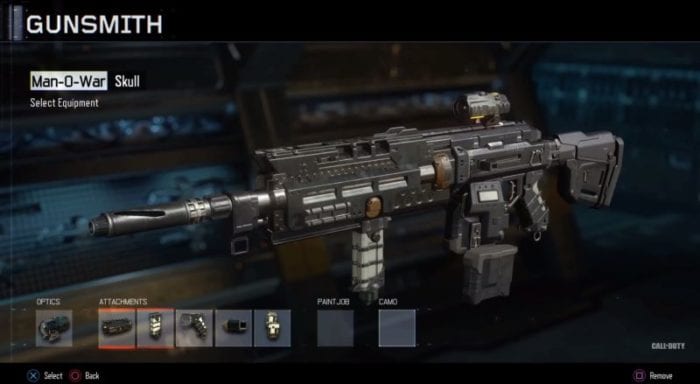 The Pick Ten System is back in Call of Duty: Black Ops III! Since its debut in Call of Duty: Black Ops II, CoD fans have experienced the struggle of trying to prioritize whether or not they want crazy perks, tons of equipment options, or to customize the crap out of their guns. Don’t get us wrong, it’s a really cool way to give people more ownership of their play style, but whether to go for the red dot sight or a new grenade is a tough choice.

If you’re the type of player that doesn’t care about anything but running and gunning, then you may be interested in how to maximize the potential of a single weapon. It’s possible to have up to FIVE attachments on one weapon, turning it into a Swiss Army gun capable of doing anything you need it to do on the battlefield. Here’s how to get the maximum amount of attachments, a whole five, on a single weapon.

It’s simpler than you may think. There’s no sorcery or idol worshiping required. You just simply need to reach level 34 in the Black Ops III mutiplayer (see our unlock guide for more). At level 34, you’ll unlock Primary Gunfighter 3. You will have already also unlocked Primary Gunfighter 1 and 2 as well by that point (obviously).

Ditch just about everything else you have picked in your Pick Ten besides the gun that you want. Then equip all three Primary Gunfighter Wild Cards (1, 2, and 3). Each one of those perks give you an additional attachment option. With all three equipped, you now can equip up to five. Keep in mind, though, that some attachments conflict with each other since they would take up the same space on the gun (different sights, for example). Still, even with that restriction, and the restrictions of not having any other weapons or equipment, that one gun is going to be an absolute monster.

What do you prefer in Call of Duty Black Ops III? Are you a fan of having all different kinds of attachments or is two enough? Let us know in the comments!