Verb. Definition: A long dormant character in a video game franchise being revived as the face of a new series before being slowly shuttered out of the line altogether. Examples: Spyro 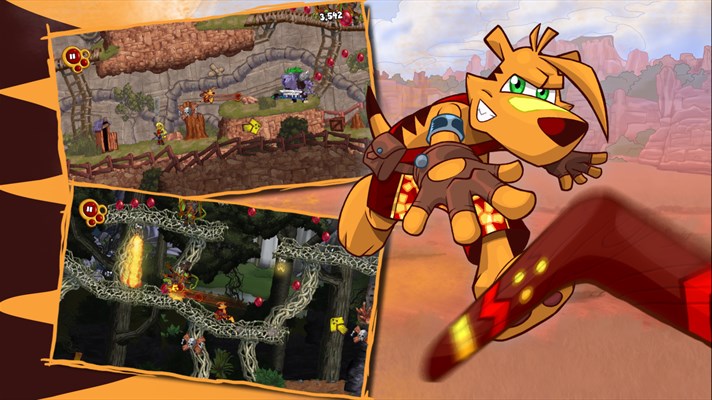 Who is He? A platformer series from the PS2 era by Krome Studios and EA (later Activision for the third game). The last of his kind, our Ty went on a mission to save his family from the Dreamtime realm after they were imprisoned there by the villain Boss Cass, a cassowary hellbent on world domination. True to his Australian nature, Ty uses elemental boomerangs to fight enemies and solve puzzles. After Night of the Quinkan releasing in 2005, the series went dormant until Krome put out Boomerang Blast for the iOS in 2012 to celebrate the series’ 10 year anniversary. The fourth numbered entry in the series came out earlier this week on PC, and the reviews so far are actually pretty positive.

Best Game? The original, for sure. Camera may be wonky and Ty can sometimes be hard to control, but the rest of the series doesn’t entirely reach the level of fun this one does.

Chances of Being Skylanders’d? Not likely. That Ty 4 is currently only for PC means that it’s more than likely that’s what Krome will be releasing any future games for Steam. Unless future games also add more characters to the universe, the fairly small library of characters in the canon means that it wouldn’t even come within close range to Skylanders or Disney Infinity.

Who is He? The cunning, devious, theivius raccoonus developed by Sucker Punch during their pre-Infamous PS2 era days, Sly comes from a long line of master thieves whose origins stretch back to the prehistoric era. Think Looney Tunes meets Assassin’s Creed. With the help of his childhood friends Bentley and Murray (along with later additions like the Panda King and Dimitri), the Cooper Gang travels the world pulling off grand heists and sometimes saves the world. You know, just thief things.

Best Game? Sly 2: Band of Thieves is where the series found itself, going from platformer to sandbox and letting players switch between the three members of the Cooper Gang. Each one has their own set of skills needed to pull off grand heists that put Ocean’s Eleven to shame.

Chances of Being Skylanders’d? Middling. The series returned with Thieves in Time in 2013 and ended with a cliffhanger of Sly stranded in early history Egypt. Since then, nothing has been said about the series returning, but Sucker Punch has always said they’d return to the series at some point in the future. The character roster would be tricky if they want to get extensive like Skylanders; all four games add up to a cast of a little over 40 characters, most of them major players in the series. Sucker Punch is currently hiring for a “3rd person action game”, but that could also be another Infamous title. If Sony wanted to get in on that market, Sly wouldn’t entirely be a bad place to start. In fact, that could only be rivaled by…

Who are they? One’s a human…elf…guy, the other’s an ottsel (half otter, half weasel). Together, they save their world from the forces of evil, travel through time, communicate with the ancient beings the Precursors, and sometimes get hopped up on dark and light Eco. Actually, Jak does most of this while Daxter rides on his shoulder and yaps a bunch.

Best Game? While its predecessor may have leaned too hard on the GTA meter, Jak 3 finds the right balance between the series roots and its future as an action-sandbox. The series has built itself on reinvention and risk, and this game is the riskiest of all; switching from sandbox action adventure to platformer to car combat at the drop of a hat and not faltering. The story may raise more questions than it does answers, but the last act reveal of the Precursors is damn hilarious for out of left field it is. Most of the games in the series are great, but this one stands in the top.

Chances of being Skylanders’d? Like Sly, that one’s up in the air. The franchise hasn’t been around since PlayStation All-Stars and that Lost Frontier game we all agreed to never talk about again. Before working on The Last of Us, Naughty Dog said that they’d considered rebooting Jak and Daxter, but it didn’t fit with the spirit of the franchise. On one hand, it’s respectable for them to know when to call it quits, the need for a new Jak and Daxter is high, and while getting the Skylanders treatment isn’t what the series truly deserves, something in that vein would at least be good to test out where the franchise would go. If nothing else, it could win back fans who thought the series went “too gritty” with the sequels.

What franchises do you hope don’t go the way of the Skylanders? Let us know in the comments below.