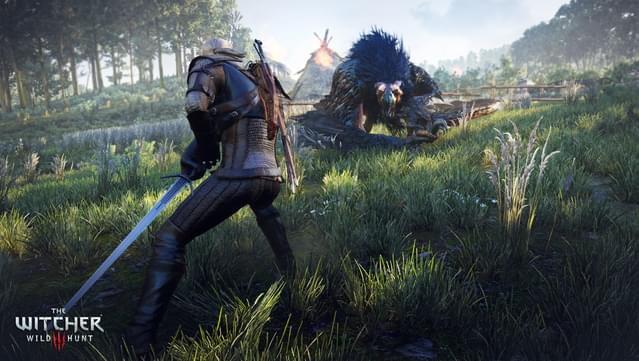 The Shrieker, or cockatrice really, is one of the few optional contract monsters you can fight in The Witcher 3. You can get this witcher contract once you unlock Crow’s Perch in Velen and examine the noticeboard. The level suggestion for this contract is level 8, and I recommend getting Geralt to at least level 7 before attempting this fight. Here’s how to beat the Shrieker in The Witcher 3.

How to Beat the Shrieker in The Witcher 3

Before you fight the Shrieker, make sure to bring a bomb or a Sanum with you. You’ll need either one of these items to draw the monster out of its lair. You’ll also want to have the Quen Sign ready for the fight. Once you’ve done that, follow the marker on your map to track the Shrieker to its cave.

Use your witcher sense to identify the creature’s hiding position, and then use either the bomb or Sanum to lure it out. Once you’ve done that, quickly exit the cave and call for your horse to start pursuing the monster.

When the monster lands, hop off your horse and get ready for a relatively tough battle. The Shrieker’s movement patterns are quite similar to the Royal Griffin’s in that it uses its claws and talons to swipe in front of it.

However, the Shrieker is much faster and also a little tougher, meaning you’ll have to be very careful if you’re standing in front of it. The Shrieker also attacks in a much wider arc than the Griffin.

Before you start attacking, activate the Quen Sign to avoid taking damage from the Shrieker’s swipes. Given that the monster’s attacks are extremely swift, it’ll be harder to dodge to the side, making the Quen Sign an invaluable tool in this fight.

Another attack you need to watch out for is the Shrieker’s charge attack. When the monster stops swiping at you and stands on its hind legs, get ready to roll out of the way.

You’ll have about half a second before the Shrieker charges at you. The good news is: if you successfully dodge the charge, you’ll be able to get a few free hits in.

Another thing to note is that the Shrieker will sometimes try to defend itself with its wings when you attack it head on. When it does this, that’s your chance to sidestep around the beast and strike it from the rear.

As long as you keep out of the Shrieker’s reach, and remember to cast Quen whenever it runs out, you should have little problem taking the monster down in spite of its huge health bar.

Once you’ve slain the beast, remember to loot its body for a trophy and take it back to Chet in Crow’s Perch. Completing this contract will also net you the ‘Shrieker’ trophy in The Witcher 3.

That’s all you need to know for how to beat the Shrieker in The Witcher 3. For more guides, tips, tricks, and information regarding The Witcher 3: Wild Hunt, be sure to check out our constantly expanding wiki.