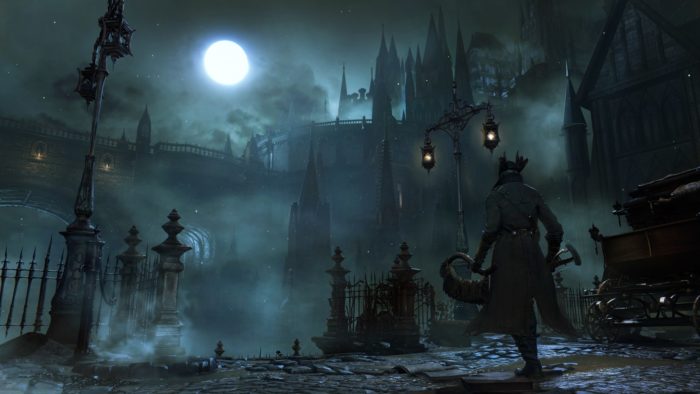 “I should think you still have dreams? Well, next time you dream, give some thought to the hunt, and its purpose.”

I had to listen to that little tidbit of dialogue about 4 times or so before I finally took the commonly dished out advice of “git gud” from the Souls community and vanquished the hunter Djura. While Djura isn’t a particularly tough opponent to face (all it takes is some masterful dodging and timely ripostes), he’s one of the more compelling characters in Bloodborne I’ve come across so far. For reasons unbeknownst to me, he seems to favor the beasts I’m trying to kill in Old Yharnam, which may explain why he tried to murder me with a gattling gun when I first entered the area.

The city of Yharnam has been plagued by a disease, which turns its residents into monstrous beings. Even the hunters, whose jobs are to hunt down these beasts, are at risk of falling victim to the disease and turning into monsters themselves. Father Gascoigne, for instance, is the perfect example of a fallen hunter who is no longer distinguishable between man and beast. And then we have Eileen the Crow, the woman with the iconic bird mask who has taken it upon herself to take down the fallen hunters.

Framing the dynamic of hunter versus beast is the glorious city of Yharnam – gothic, Victorian, a nightmarish interpretation of old Europe with a dash of Lovecraft and a sprinkle of Shelley’s Frankenstein. At first glance, Bloodborne looks like a game that’s meant to punish the insouciance of players and give them a hard time. After all, isn’t that the kind of reputation the Souls series has earned for itself? But, just like Demon’s Souls and Dark Souls, peeling away the layers of gameplay will reveal an elaborate weaving of plot and an element of grotesque beauty, as oxymoronic as that might sound.

While Bloodborne continues the Souls trend of venturing into the dark fantasy genre, Yharnam looks and feels vastly different from Boletaria and Lordran. Demon’s Souls and Dark Souls were successful in creating a sense of atmospheric dread when you first started those games, but Bloodborne seems to push things even further by blurring the line between beauty and horror. When discussing Bloodborne, game director Hidetaka Miyazaki often mentions finding “beauty in darkness” in his interviews, and this is evident even in the Souls games. The Moonlight Butterfly in Dark Souls, for example, floored me with the elegance of its design.

When you walk into Yharnam, you’re immediately accosted by the gorgeous sunset that lurks behind the crumbled ruin of a once glorious cathedral, the ornate detail that goes into crafting Yharnam’s streets, its gravestones, statues, and even its monsters. Every piece of architecture and every enemy you come across tells a little bit of the carefully constructed story that Bloodborne has to offer and, just like in the previous From Software games, it’s up to the player to fit these pieces together and get the full picture for themselves.

The bosses, though frightening in appearance, are all indicative of a descent into ruin. The Cleric Beast, the Witch of Hemwick, Vicar Amelia – all the bosses carry a piece of Bloodborne’s lore with them; they’re not simply foes to be slain in order to progress with the game (well, they are. But look, they’re more than just monsters, okay?). The bosses are all grotesque by design but it’s easy to see that they’ve been carefully crafted to follow Miyazaki’s vision of “beauty in darkness.”

NPCs, bosses, and even your regular enemies in Bloodborne are victims of humanity lost. There are those who struggle against the darkness of Yharnam – your protagonist, the hunter Djula, Eileen the Crow – and you could even see the Hunter’s Dream as a safe haven from the rotting decay of the city, but there’s no getting round the fact that Bloodborne is a spiritual battle between those who are human and those who used to be.

There is a mechanic in the game called Insight where you can gain Insight points each time you enter a new area or encounter a boss. You can also boost your Insight rating by consuming Madman’s Knowledge. But here’s the catch: the more Insight you possess, the greater the danger of your hunter falling into a kind of madness. Your hunter begins seeing changes around Yharnam that weren’t there before, and this is in keeping with the Lovecraftian theme of forbidden knowledge bringing about the downfall of mankind. The entirety of Bloodborne can therefore also be seen as the player’s own battle between gaining more knowledge and staying safely ignorant of the veiled evil that is present in Yharnam. There is a kind of morbid fascination to be found in the slow ruin of humanity, and that’s precisely what Bloodborne encapsulates.

But morbidity isn’t the only thing you can find in Yharnam; the quiet moments don’t come often but when they do, the game shocks me with how tender it can be. The slight start of the abandoned doll when you wake her up from a dream, and the soft, radiating light that emanates from the hunter’s hands as you pour your blood echoes into your fighting prowess – these moments may seem inconsequential, but they only serve to highlight the dichotomy that exists between those who have retained their humanity and those who have descended into madness.

And if we want to get a little meta here, Bloodborne is about the struggle between player and game. Just as our hunter pieces the story together by learning the history of Yharnam, we study the intricacies of each level and the calculated movements of each great foe we face.

When the nightly hunt began, my dapper hunter and I merely saw it as a mission to rid Yharnam of monsters. But when Djula chided my hunter and asked that he give some thought to the hunt’s purpose, as a player I began to wonder: is there some larger purpose that I’m missing in this game? What else is Bloodborne, if not another videogame for me to conquer and show off to my friends?

Perhaps we should stop looking at Bloodborne, and the Souls series as a whole, as a bunch of games that has been created specifically to test the wits and skills of the people who call themselves gamers. With the amount of care poured into the game’s story, its deliberate monster designs, it’s clear that Bloodborne is meant to be so much more than just a really difficult game. The game is representative of Miyazaki’s continuous quest of pinning down the beauty that can be found in darkness and the unknown – not just thematic beauty, but aesthetic beauty too, evident from the delicacy with which Yharnam has been constructed.

After countless hours of trying to “git gud” at these games, I’ve finally gotten a handle on what Miyazaki has been attempting to accomplish with his work. His vision, specifically in Bloodborne, is one of past grandeur and the depiction of beauty that transcends our superficial understanding of the word. Everything could be rotting and dying around you in Yharnam, but you can’t help but admire the lovely sunset that peeks around the shadowy silhouette of that chapel in the distance.