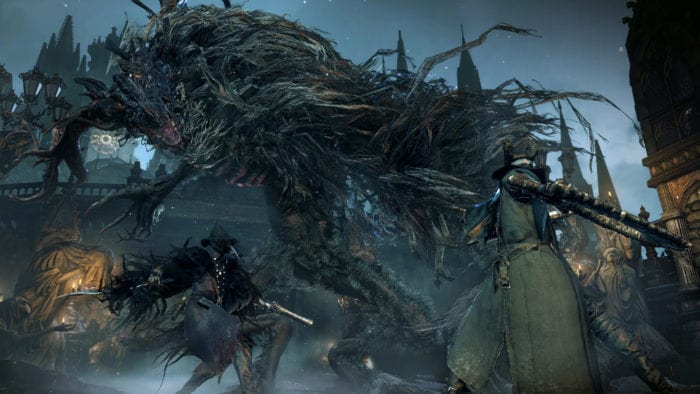 If you’re looking at this guide, then you’ve probably already found yourself ensnared by the brutal beauty of Bloodborne – from the horrific ambience of the gothic architecture, to the moody music, right down to each enemy’s gory design. But, one thing that is morbidly beautiful is the first boss you encounter as you explore the city of Yharnam. That boss is the Cleric Beast. Here’s our guide for how to beat the Cleric Beast in Bloodborne.

How to Beat the Cleric Beast in Bloodborne

This huge, horned beast is one of your first major obstacles and presents two distinct challenges in your encounter. Fortunately enough this fight is much easier than it seems at first glance. Bring some Molotov Cocktails, some Blood Vials, and be ready for a long fight.

The first challenge you may notice early on when you encounter the Cleric Beast on the bridge is that you don’t have much wiggle room. The bridge is pretty narrow, and you’ll notice that the Cleric Beast easily takes up the whole width, making dodging seem like an impossible affair. This becomes a huge obstacle when coupled with the second challenge this boss fight presents.

That second challenge is the Cleric Beast’s speed. This thing is huge, but it is also ridiculously fast and powerful. The Cleric Beast’s speed combined with the narrowness of the fighting area will make maneuvering your primary concern, but it will also give you an advantage provided that you can nail down the timing.

The first thing you’re going to want to do in order to take full advantage of this boss is wait. Yup, that’s right, just sit back and watch. The Cleric Beast doesn’t have an exceptionally large move set when compared to other bosses in Bloodborne, so you can learn its entire attack list within the first minute of combat. There are 3 moves you should be watching out for in particular.

The first one is the high jump. This one is obvious because you will see the Cleric Beast shift its weight to its haunches before launching itself high into the air. Wait until you see its shadow right over your hunter, then do a quick roll with forward and circle. The next two moves involve slam attacks with its left arm (the extra furry one).

If the Cleric Beast leads with an overhead attack with this arm, it will be immediately be followed by a pounce. Don’t go in for the attack, instead wait for it to pounce and then dodge before it lands. The other one will have the Cleric Beast cover its face then do a sort of tackle move. This will be followed by an overhead left hand attack again.

Although you should be watching for the bigger arm, its smaller right arm is still dangerous, and much quicker. Always stay alert.

These moves are used to clear a lot of distance and corner you, but never take the bait and just keep it moving. After getting behind, feel free to take one or two swings followed by another roll so you aren’t caught in a counter attack. If any of these moves connect, you will lose at least half of your HP. If this happens, roll as far as you can and use a Blood Vial by pressing the triangle button.

Now that you know what moves to watch out for, you’re ready to go on the offense.

Remember those Molotov Cocktails we told you to bring? Whenever the Cleric Beast is sitting still, be sure to let one fly. It’s best to try and save some of the Oil Urns to increase the fire’s potency. You can’t buy Oil Urns yet at this point in the game, so don’t worry if you don’t have any. Just make sure to have a handful of Molotovs to help whittle down this boss’ health.

Between taking pot shots with your bottles of explosive flame, you’ll be waiting and evading. Always make sure to have as much bridge behind you as possible; a wall behind you can often mean death. But, you also want to never be too far from the boss. Bloodborne will present opportunities to take down monsters, but these opportunities have short windows. In the case of the Cleric Beast, its overhead smash attack will sometimes leave its claws stuck in the ground.

If you move in quickly, you can attack the wrist to cause serious damage and stun the enemy (if you aren’t quick enough, it will pull its hand out and damage anything close by). When stunned, it will bow down and open its face up for just under 10 seconds.

That’s enough time for at least two fully charged heavy attacks (triggered by holding R2), after which the Cleric Beast will regain its composure and repeat the process. It’s as simple as that.

When its claw is stuck like this it’s time to strike. Just watch out for when it tries to free itself before you can get in there.

The only thing you need to keep an eye out for is the rare occasion where it briefly flashes red.

Whenever this happens, its next attack will do considerably more damage. But, since you’re already on the lookout for the big attacks, this should not change your strategy.

This battle can take a bit of time, but patience is the best course of action, especially if you don’t have many Blood Vials in your possession (it can often take two to fully heal from one attack). Before you know it, you’ll have defeated one of Bloodborne‘s many bosses.

Ah, the beast is down, with 2 Blood Vials left to spare. That’s all you need to know for how to beat the Cleric Beast in Bloodborne.

Do you have any tips to help your fellow hunters tackle Bloodborne‘s first boss? If so, feel free to share. If you need some more help with Bloodborne, also check out our beginner’s guide.