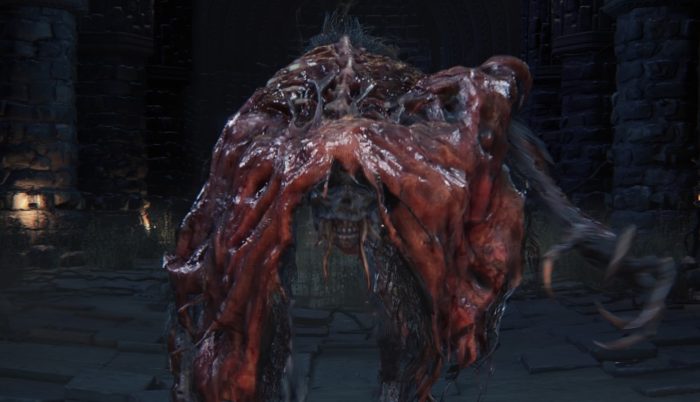 So you’re exploring Bloodborne and have stumbled across Old Yharnam. It’s a rather run down piece of the city; riddled with fire and fallen debris as enemies roam about. You navigate the labyrinthine ruins, ducking in and out of cover to avoid the fire raining down upon you from the gatling nested in one of the spires. Deeper down you go, treading any beast that dares to cross you underfoot, until you come across a large tomb-like structure. Within its walls lies your most brutal threat yet, the Blood Starved Beast. Here’s how to beat the Blood Starved Beast in Bloodborne.

How to Beat the Blood Starved Beast in Bloodborne

Before you get started make sure to stock up on Blood Vials, Antidotes, and Molotov Cocktails, and if you’re lucky enough to find any some Pungent Blood Cocktails. You may also want to invest in your stamina stat, because you’re about to engage in one fast-paced dance.

The Blood Starved Beast looks a lot like the Cleric Beast that you encountered a few hours ago, except a bit more… inside out. This particular early boss from Bloodborne has huge, bleeding flaps of skin hanging from its back, and it drips goo pretty much everywhere.

But that’s not your concern just yet, the first thing you want to do is take a quick look around to realize just how difficult this fight is going to be.

The area is lined with large columns to the left and right and a huge altar-like block towards the back of the room that you can get behind. Your first thought will most likely be, “at least I have cover,” and to an extent you’re completely correct; these obstructions will help you grab just enough time to down a Blood Vial, or pop an antidote.

But outside of those necessary rests, these columns will prove to be your worst enemy during one of Blooborne‘s more fast-paced boss encounters.

The Blood Starved Beast is fast, and it likes to make long dashes. Combine this with the columns and you have a very powerful boss who is constantly breaking your line of sight leading to your lock-on disengaging every few seconds.

Prepare to become really acquainted with the R3 button, because you guys are gonna need one another if you are to have any hope of laying a hit on this guy. Chances are that you will die on your first attempt, use this opportunity to practice dancing through the columns and adjusting to the Blood Starved Beast’s speed.

You can get directly to the boss from the nearest lantern pretty quickly, and there are only around 5 enemies on your path, so you don’t have to worry about losing tons of Blood Echoes with each death.

Now that you’ve surveyed the battlefield, it’s time to learn this boss’ patterns. The Blood Starved Beast doesn’t have a very extensive move-set, which is a good thing, because then this boss would be borderline impossible to defeat.

But it does have two phases, but we’ll get to that. There are three particular actions you want to watch out for outside of it’s basic swings and slashes.

One is when the Blood Starved Beast lowers its body and extends it’s right arm out to the side, this means that the boss is about to dash towards you at high speed in an attempt to grab you. This is also when you usually lose the lock on.

The second is when it completely drops it’s body. This is a sign that the beast is about to pounce. It’s best to dodge this with a simple sidestep since it will keep you in range to do some much needed damage. Make sure not to use all of your stamina on attacks.

The Blood Starved Beast tends to turn quickly in order to get a quick swipe or two in before hopping away. You want to have some stamina saved so you can quickly roll/jump out of the way.

Before we get into the last action to be wary of, it’s best that you know about the Blood Starved Beast’s second phase. After you take out just under half of this boss’ health it will pick up speed and gain a new ability, along with a damage buff.

The new ability is slow poison. It may have slow in the title but if your resistance isn’t high this skill will eat through your entire health bar in a matter of seconds (which is why you were instructed to stock up on antidotes).

One benefit to you that comes with this phase is that the Blood starved Beast will always broadcast when it’s going to dish out the poison. This is the third action you need to be aware of.

And that’s all there is to how to beat the Blood Starved Beast in Bloodborne. Best of luck on the rest of your dark journey.