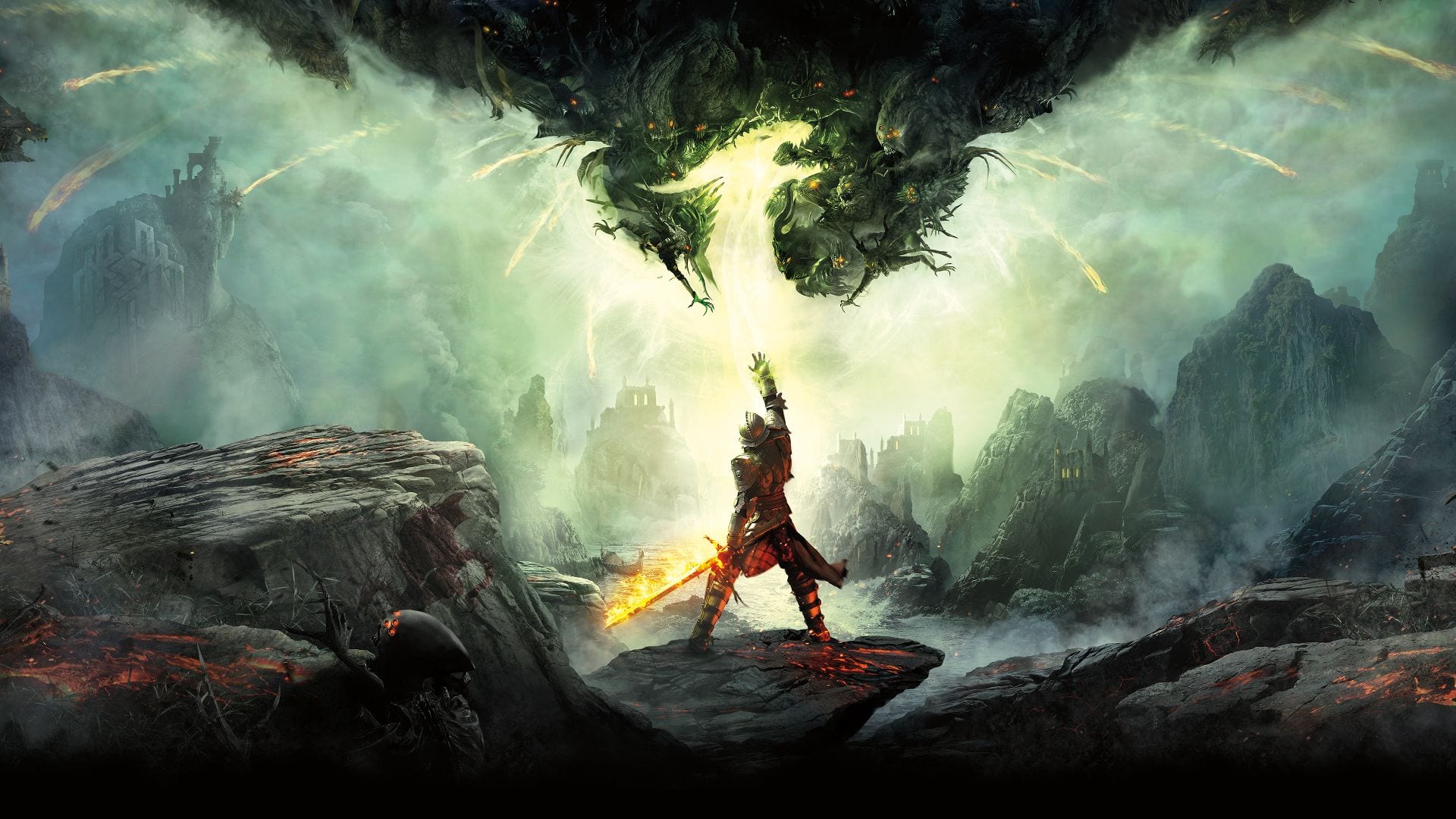 Dragon Age: Inquisition presents players with a deep, engaging world filled with interesting characters and deadly enemies. One of the deadliest creatures you will come across as you journey through Thedas is the high dragon. Powerful and fearless, they will not hesitate to cook you alive and feast on your remains. Once you come across one face to face you are presented with two options: flee with your life intact or stand your ground and earn your place in history. Here’s our guide for how to kill dragons in Dragon Age Inquisition.

Of course you didn’t purchase a game titled Dragon Age: Inquisition in the hopes that you would never come across a dragon. You have already made your choice and every beast that dares to cross your path must be put down. You must now prepare for some of the most challenging battles presented in Dragon Age: Inquisition.

Every dragon brings something new to the table but they all follow the same general rule-set. With that in mind, here are some tips to help you get set up for whatever dragon dares to threaten your party.

It’s no secret that dragons are extremely powerful. They are deadly at both close and long range, and they have the ability to control the battle area. Approaching them at low level is suicide no matter how you think about it. For that reason you need to do quite a bit of leveling up.

Chances are if you’re planning on tackling the High Dragons that have made their homes throughout Dragon Age: Inquisition’s Thedas, then you’ve already begun the process of getting stronger.

Complete side missions, gather codex entries, and let no enemy that crosses you survive. Doing so will ensure a constant influx of experience points (XP). Gathering enough earns you a new level which provides both a skill point and the ability to equip stronger gear.

Gear is where you really want to pay attention. The High Dragons of Dragon Age: Inquisition are immune to status effects meaning you will want to focus on damage output rather than trying to slow it down.

A higher damage per second (DPS) rating will help you whittle down the armor and health of a High Dragon as you navigate the field.

Taking your time to either craft powerful weapons and armor or to find some in your travels is useful, ensuring that you’re able to survive the fight.

There are some really powerful weapons that you can find early on in Dragon Age: Inquisition if you play your cards right. One such weapon is Tempest, a unique staff found in the Still Ruins located in the Western Approach. It is a powerful mage weapon that is very useful against dragons weak to ice damage.

Gathering your strength will take some time so try your best to not become impatient. Dragons range from level 14 all the way to 23 so you may find yourself leveling up more than once. There are plenty activities for you to take part in to keep you occupied.

Use everything to your advantage in your quest to become to slay dragons. Before you know it, you will have a team of leveled up, powerful allies at your disposal for Dragon Age: Inquisition’s dragon hunts. Now you just have to select who to bring along to the fight.

So you’ve managed to level up and are now ready to take down a dragon. Since you’ve undoubtedly already played hours upon hours of Dragon Age: Inquisition, you’ll already know that you are only as good as the companions you bring with you.

BioWare did a good job of ensuring that teamwork plays a pivotal role in all major battles. Your Inquisitor may be strong but no matter what you do he/she will never be “take down a dragon on my own” strong. For this very reason you will need to select some party members.

In order to choose party members you must understand the enemy you’re fighting. High Dragons are huge, powerful, and can fly, so that is something that you need to keep in mind.

They also have specific weaknesses and resistances that you will have to adapt to, so having a well rounded dragon hunting party is imperative. With this in mind you are ready to form your team.

To make things much easier for yourself, you will want 3 ranged fighters. You can choose whoever you want, but having 2 mages has the most benefit although you can still manage with only 1 mage.

Having 3 ranged fighters is a must due to the fact that ranged dragon attacks are easier to dodge and dragons like to move around a lot. Having most of your damage come from ranged combatants ensures that you will always be able to land a hit no matter where the beast may land.

Bringing 2 mages is highly recommended thanks to 2 simple reasons. For starters you can have each specialize in two of the schools of magic (spirit, fire, ice, lightning), having access to all of the elements guarantees that you will be able to exploit the targeted high dragon’s weakness.

Secondly, you are able to constantly keep barriers on your party in order to protect them from all incoming damage.

Make sure at least one of your mages (or your only mage if you choose) has the revival ability. You are able to revive fallen party members but you have to stand over them leaving you open to attacks.

The revival ability allows for your mage to revive any fallen comrade from a safe distance, a blessing in this part of Dragon Age: Inquisition.

As for your fourth party member you will want a melee fighter, specifically a warrior. Some of the dragons can be aggro’d, so keeping them focused on a warrior in front of them while you rain down elemental damage from afar will make your job much easier. It also helps when it comes time to defend your party from area attacks.

Tactical View is Your Friend

Tactical view has returned in Dragon Age: Inquisition and this time it is available on all platforms. For those of you who don’t know, it allows for you to freeze the action in order to take direct control over your party during combat and to gather information.

Unless you are a huge fan of strategy, you may not have found yourself using this feature much. But prepare for that to change during your bouts with high dragons.

You may be thinking to yourself “but I prefer standard combat, I don’t want to micro-manage my entire dragon fight”.

Don’t you worry, you do not have to use the Dragon Age: Inquisition tactical view for the whole fight if you don’t want to. What you will be using it for is the repositioning of your ranged fighters and to get a quick view of the dragon’s weakness.

Every high dragon is weak against one element, and highly resistant to another. Snap into tactical view as soon as the flying foe is in range and take a look at what you’ll need against it.

The sooner you know what you should and shouldn’t use the better, you don’t want to waste time and/or mana doing something that just will not work.

Now for movement, the tactical view will allow you to move any of your ranged fighters out of harms way.

Most ranged attacks are easily dodged so you don’t have to worry to much about those, but dragons will often switch to a position closer to your ranged fighters or pull your entire party in close. this is when you want to snap into tactical view.

Once close, the dragon will attack with its claws, teeth, tail and elemental attack allowing it 360 degrees of damage against anyone unlucky enough to get sucked in.

You can easily move out of its range one by one but that leaves the rest of your party in danger as you find a position. Using Dragon Age: Inquisition‘s tactical view allows you to move all of your ranged party members at once to a position where they can still wreak havoc but are also out of harms way.

Fighting a dragon in Dragon Age: Inquisition will take everything you have. It will eat through your potions, it will take up a chunk of your time and you will see members of your party die more than once. It may take you a while to get used to which can lead to multiple attempts. It’s easy to get sucked in and to keep trying but sometimes you need to just run.

A hunt isn’t successful if you don’t get the kill, but if you can use some of the battle to learn what you need than that can prove to be useful. If a battle isn’t going your way take a few minutes to learn your targets moves and weaknesses.

Plan accordingly, switch up your party, change your gear and then come back to fight another day in Dragon Age: Inquisition. Remember, your end goal is to take down a High Dragon so always play with that in mind.

In time you will find yourself hunting down and taking out dragons with ease. Just remember to take it slow, gather all the strength and tools you need, and then show them who’s boss. Before you know it, you will be the ultimate, dragon slaying inquisitor of Dragon Age: Inquisition.

How have you fared so far in your dragon hunting endeavors? Feel free to share what has worked for you. For more info on Dragon Age: Inquisition, make sure to check out their official site.

Risk of Rain 2: How to Unlock All Characters (Rex, Mercenary & More)
Modern Warfare: How to Inspect Weapons
Fairy Tail: What the Max Level Cap Is